THE road leading in front of the Kenton Magistrate’s Court overflowed with people on Monday, who waited to hear the outcome of the bail application of two elderly men, accused of several charges related to the alleged rape of underage children over an eight-month period, from December last year to July this year.

Singing songs and carrying banners, men, women and school children waited outside the court all morning, voicing their demand that the accused men not be granted bail. Each man is charged separately and each would appear separately. Of the many outside, only 15 could cram into the tiny Kenton courtroom, leaving the rest to await news of the outcome from outside the courthouse perimeter.

However, by the time the first of the accused men took the stand, magistrate Louis Muller was informed the court recording device was broken. Muller allowed for an hour and a half adjournment of the hearing to enable the problem to be fixed.

Earlier the crowd outside the courthouse had speculated that the bail hearing and subsequent case could be moved to Alexandria to be heard there, but during the recess it was discovered that the recording device in Alexandria might also be broken. However, on his return, Muller made it clear that this would not be the case.

“Justice must be seen to be done,” he said. “Due to the high level of public interest, this case must be carried out among the people of Kenton. It is too important to be moved.”

Outside the court, those who remained were addressed by Khula Community Development Project director, Petros Majola, who informed the crowd what had occurred in court, and thanked everyone for their support.

“Thank you to the politicians of all parties who have attended her today. Also to the various organisations in attendance who advocate for the protection of children.

“I also want to say thank you to magistrate Muller for retaining the case in Kenton, and for your understanding of how important the results are to the people of the area.”

‘My generator is still missing’ 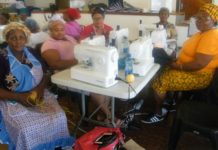 Sewing groups to receive a boost of 57 machines

Get your ticket for a fun morning in our garden! L

Who can guess where this is?🤔 #talk_of_the_talk

This week's edition of #talk_of_the_town_ndlambe o

Have you got your #copy yet?? Full of news that ma

Don't miss out on the live broadcast! And remember

Don't miss out on the news! Get your copy today a

No, cigarettes are not essential during lockdown, say police

Army and police out in force in Joburg and Cape Town...

No, cigarettes are not essential during lockdown, say police

Army and police out in force in Joburg and Cape Town...