Consumer inflation has moderated but will remain ‘uncomfortably close’ to the upper limit of the target band, Reserve Bank governor Lesetja Kganyago says

The Reserve Bank left interest rates unchanged on Thursday, as had widely been expected.

In announcing that the repo rate would remain unchanged at 7%, Bank governor Lesetja Kganyago said although inflation had moderated, the outlook for economic growth had deteriorated.

Consumer inflation has been slowing steadily this year, after spending the better part of last year outside the Bank’s 3%-6% target band. Moderating food inflation has been an important factor, as most of the regions hit by a severe drought have experienced relief.

In addition, the rand has been relatively strong — and weathered the downgrades to SA’s sovereign credit rating surprisingly well — with recent strength due in part to a weaker dollar.

Slowing inflation and the stronger rand, coupled with weak economic growth, may have provided the MPC with reason to cut rates, but the currency remains vulnerable to internal and external shocks — as seen in its fall last Thursday, when news of a Brazilian bribery scandal broke. 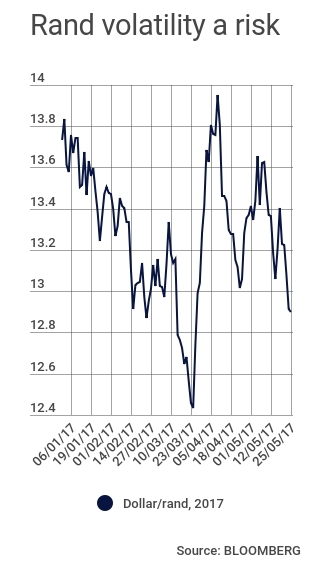 “With further ratings decisions imminent, risks remain for a further depreciation against the backdrop of continued global and domestic political uncertainty,” Kganyago said on Thursday.

He said the currency had been supported, however, “by a more favourable current account outlook, following a significant narrowing of the deficit in the final quarter of last year”.

The consumer price index (CPI) for April came in better than expected on Wednesday — a 5.3% increase from a year earlier.

“Headline inflation has now returned to within the target range as expected, with outcomes in March and April surprising on the downside. While the inflation outlook has improved over the near term, the longer-term forecast trajectory is unchanged and uncomfortably close to the upper end of the target range,” Kganyago said.

He outlined the following inflation forecasts:

He said inflation had peaked at 6.4% in the first quarter, in line with the Bank’s earlier projections.

The outlook for economic growth, meanwhile, has worsened.

“Domestic economic growth prospects have deteriorated, as the impact of the ratings downgrade is expected to weigh on domestic investment and consumer sentiment over the forecast period,” the governor said.

“The trajectory of the growth forecast is still positive, and the growth rate for this year is expected to exceed that recorded in 2016.”

“The trajectory of the growth forecast is still positive, and the growth rate for this year is expected to exceed that recorded in 2016.”