AT the tender age of 18 Graeme Enslin had already been involved in his first skirmish with enemy combatants in the Rhodesian bush war.

Raised in Zimbabwe, Enslin opted out of school in his matric year and joined the army. It was during his national service training that a recruitment team from the famous Rhodesian Light Infantry Regiment (RLI) called for volunteers to join their ranks and become professional soldiers. Enslin and 12 others volunteered and it immediately became apparent that he had found his niche in life. It was to be the beginning of a distinguished military career.

“I was attracted by the regiment’s uniform and was proud to wear it,” he added.

After completing his basic training, Enslin was posted to his unit within the regiment in 1969. He took this seriously and soon rose in rank from trooper to sergeant in four years before he moved on to colour sergeant.

Not satisfied with this he underwent and passed the course and was promoted to the rank of warrant officer class 11 in 1978. Enslin had become the youngest WO 11 at the age of 26 and had achieved this in the shortest time. With this he became company sergeant major of the support commando in the RLI.

Meanwhile, the bush war had started and it was in February 1970, that he had his first brush with terrorists when he came under fire. He was just 18.

“The bush war got very serious in 1972 and we were full out at war non-stop,” Enslin said. “We would spend six to eight weeks in the bush and then come home for 10 days’ leave before going back into the bush.”

Enslin had also completed the paratroopers’ course and in November 1977 he was involved in “Operation Dingo” when the RLI joined forces with the equally famous SAS regiment when they attacked two huge terrorist base camps in Mozambique.

They were to act as stopper groups and were flown in by Dakotas and dropped from a mere 500 feet, only in the air for 20 seconds before landing. “The reason for this was to give the terrorists minimum time to shoot us while we were hanging helpless in the air,” he added.

Another massive operation Enslin took part in was when the RLI, again in conjunction with the SAS, was to attack a huge garrison in Mozambique which housed up to 5 000 Frelimo soldiers and guerrillas from Rhodesia. Firstly, they established a base camp from which they demolished all the main rail and road bridges. The final part of the operation was to attack the garrison at Mapai.

Tragedy struck when this was happening when a Puma helicopter was shot down by an RPG 7 rocket launcher, killing all 21 Rhodesian soldiers on board. Among then was Enslin’s younger brother, Brian, who was just 20 years old. Their bodies were never recovered, but it was later established that they had been buried by the locals living in the surrounding villages.

Some 30 years later a group of Rhodesian soldiers who took part in this operation, including the officer commanding, returned to Mozambique to establish the crash site. This they did and a simple cross was placed on the spot. A plaque, which simply read “These brave men” was placed on a nearby tree. Enslin was to follow this up soon afterwards, where he also placed a plaque of his own.

Enslin explained that the Rhodesian army developed the “fire force” system of fighting the bush war and the RLI were largely responsible for this. It has since been said by military experts throughout the world that the RLI were experts at this and there was no equal. “We were professionals and were very good at this,”Enslin said.

Ceasefire eventually came in December 1979, when Enslin was honoured by being awarded the Rhodesian Defence Force Medal for Meritorious Service and also the General Service Medal.

Enslin retired from the regiment and left the country in 1980 to settle in Queenstown, where he had his own security firm. While there, he joined the East Cape Game Management Association and became involved in teaching children the ethics of hunting and conservation for nine years.

He and his wife have three children and a grandson.

He said they would jump at the same time as the Hawker Hunter jets dropped their bombs on the bases and it was an amazing sight to see the bombs going off with terrorists running in all directions. It was their job to stop them from getting away.

There was more excitement after being air lifted by helicopter to return to Rhodesia. While flying over the massive Cobora Cabassa dam they ran out of fuel, but were fortunately able to land on a small nearby island and radio through to headquarters for fuel. This was dropped in 200 litre drums into the surrounding water.

Enslin said they were involved in many narrow escapes. But one of the closest escapes from death was when he and a fellow tracker were following a group of terrorists after a military vehicle had been blown up by a land mine and killed several soldiers. They followed the tracks into Mozambique when they came across an enemy sentry near a base camp.

They returned to their section under the command of Lieutenant Don Price, who now also lives in Port Alfred. They were ordered to lead the way back to the base camp and were half way across a dry river bed when “all hell was let loose” as the terrorists opened fire. He said, “The bullets sounded like angry hornets around our heads and, fortunately, we were able to dive for cover behind a nearby log. This was pure instinct and you could hear the bullets hitting into the log. There is no doubt that this saved our lives.”

He concluded by saying, “I loved my time with the RLI.  With an average age of 18 – 19 they were special guys. We used to operate in sticks of four and we had to look after each other – we became a family.”

Another former RLI soldier who retired to Port Alfred is Jimmy Jameson, who lives in Sunset Park.

While in Queenstown, Enslin took up bowls and represented Border in 2005 at the inter-provincial tournament and also the Border mini districts team for about 14 years. After a gap of a few years, he returned to bowls in Port Alfred and recently represented EP against Border in their annual friendly match in Port Alfred. 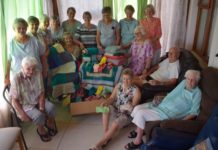 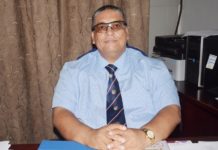 No load-shedding planned for Tuesday: Eskom

Disaster management teams on high alert as Durban continues to be...

No load-shedding planned for Tuesday: Eskom