THE big local stories this week are the water situation and Eskom. As far as water is concerned, Talk of the Town’s news editor, Jon Houzet, visited the balancing dam last weekend and took a video of the state of the operation there (see www.talkofthetown.co.za to see the video). Firstly, there is no control over anyone entering or leaving the area of the dam which, in itself, is a little worrisome. Surely the main water feed into Port Alfred should be protected? Next, he showed us the condition of the dam which is virtually empty and collecting debris. The supply of water to residents is intermittent to say the least and some of the outlying areas have had little or no water for weeks. Finally, when the water flows it is brown and smells, totally unsuitable for consumption and possibly presenting a risk to health. This is a priority that the municipality must address immediately. Water is a basic human right and, without it, people cannot survive. Amatola water, whose “quick wins” and various other promised deliverables have never come to fruition, but that hasn’t stopped them spending literally hundreds of millions on a failed project. When will the corruption end? As far as electricity is concerned, the total shutdown by Eskom on Tuesday presented business and the household consumer with challenges. All around town one could hear the “Bap, bap, bap” of engines as generators were fired up for the entire day just to keep businesses open and customers reasonably happy. However, load-shedding (that seems to have gone from a crisis to no load-shedding at all – perhaps in response to Moody’s ratings due on Friday or perhaps the May elections) is likely to continue for some time into the future unless independent power producers (IPPs) come on-board. Incidentally, the message by minister of energy Jeff Radebe that IPPs are now welcome to connect to the grid could be a good time to consider solar power. Any excess electricity can now be pumped back into the grid at Eskom tariff rates! You might be able to pay for your system in less than a year with the money you would get back.

THE Bathurst Agricultural Show is due to kick off on April 5, and Bathurst Agricultural Society president Danny Wepener and his team have been doing some fantastic work at the showgrounds to prepare for the 111th show with new roads, a general sprucing up of the area and some rebuilding work. This is a show not to be missed and it is where town and country meet and get to talk together. Make sure you and your family are ready for the show.

THE Amanzi Challenge is also almost here (April 19 to 28). So many activities are on display for the benefit of residents and the anticipated thousands of tourist who will be here for the Easter holidays and may well stay for an additional week. Don’t miss the action at the beaches and on the water, including international surfing and bodyboarding, a trail run, a mile swim, inflatable boat races, as well as plenty for the kids to do at Kiddies Beach. Read about beach handball in this week’s paper and make sure you get to the beach to witness teams compete for titles and prizes, as well as potential qualification for the U16 inaugural Africa Beach Games, scheduled for Cape Verde in June 2019.

EVERY success for many more years to follow are the wishes we are conveying to the following businesses and organisations on another anniversary, especially KTP Kitchens, Sports ‘n All.

INTERNATIONAL ratings agency, Moody’s, is due to release its ratings review on Friday and government, business and the ordinary citizen are anxious to learn if we have been regulated to junk status (non-investment level). Such a downgrade, already imposed by two other agencies, would mean billions of rand of investment would be withdrawn and all the plans for rebuilding infrastructure would collapse. The county is also holding its collective breath awaiting the announcement from the Reserve Bank to establish if the prime interest rate (that the Reserve Bank charges other banks for loaning money) are going to be increased. However, watch out. If we are dropped to junk status China will no doubt step-in with investment. This is another example of passive colonialism and state capture that we must avoid at all costs if we are to prosper as an African country. We need investment, but at what price? With last year’s figures in brackets for comparison the currency was trading at R14.61 (R11.70) to the Dollar, R19.32 to the Pound (R16.55) and R16.48 to the Euro (R14.50). In the commodities department, Gold was trading at 1,318.35 per fine ounce ($1 337.12), Platinum was trading at R855.85 ($947.20) per ounce and with Brent Crude Oil at of $67.48 ($70.11) per barrel.

SPECIAL thoughts and prayers are with all those folk who are not well, having or have already had tests, operations and treatments. ‘Sterkte’ to Roy Potter, Andrew de Vries, Jenny Groenewald, Malcolm Cock, Chris de Wet Steyn, Marian Eaten, Martin Bekker and Brenda Shelton.

CONGRATULATIONS and best wishes for many more years of happiness to all couples enjoying another anniversary, especially Jedd and Tania Reid, René and Eileen Denis, Jimmy and Julia Jamieson, Glenn and Jennifer Henning, Eric and Dawn McQuillan, Juan and Candice Pretorius, Gordon and Katie Japp, Reegan and Wouné Muller.

THOUGHT for the week: “Harmony makes small things grow, but lack of it, can make great things decay”.

BEST regards as always,
The team. 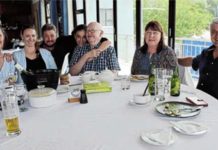 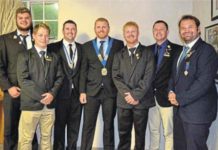 SA to cough up more for alcohol and tobacco‚ old age...