Share on Facebook
Tweet on Twitter
Residents in Knysna are being evacuated as firefighters battle to contain blazes across the area. The Knysna Provincial Hospital was ablaze as raging fires spread through the Western Cape.

Emergency services officials have begun evacuating parts of Knysna and other small towns‚ in the Western Cape as a massive fires raged late into the evening on Wednesday.

Western Cape Local Governance spokesman Jame-Brent Styan described the evacuation as “massive” but could not immediately give an estimate of how many people had been moved from their homes.

At least three people have died in the fires.

“These are the worst fires I have seen in the 45 years I’ve lived in Knysna‚” Knysna mayor Eleanore Bouw-Spies said.

“These are the worst fires I have seen in the 45 years I’ve lived in Knysna‚” Knysna mayor Eleanore Bouw-Spies said.

Firefighters responded to at least 26 fires along the Garden Route Wednesday as most of Plettenberg Bay‚ Knysna‚ Sedgefield and Wilderness were covered in smoke.

Eden disaster management boss Gerhard Otto said three people – a farm worker‚ his wife and their son – died in a fire in Rheenendal just outside of Knysna.

He said details around the deaths were still unclear but that all available staff had been deployed to deal with the fires including staff that had been on rest days.

By mid-morning about 13 houses had already been evacuated just outside Knysna towards Plettenberg Bay and the N2 between the two coastal holiday towns were closed due to low visibility.

There has also been no power to Knysna and Plettenberg Bay for most of the day as a result of the fires.

He said there was very little hope of stopping the fire and they would just continue evacuating all those in its path.

At least 11 fire engines had been deployed to the area from neighbouring towns and the City of Cape Town.

Working On Fire reported that it had deployed over 120 fire fighters to the area.

Meanwhile‚ those in need of assistance may have difficulty contacting the local fire station as several people tweeted that phone lines were down.

One woman took to Twitter to say an elderly woman was stranded on a hilltop after fleeing her burning home.

They had had difficulty reaching the fire station for assistance. 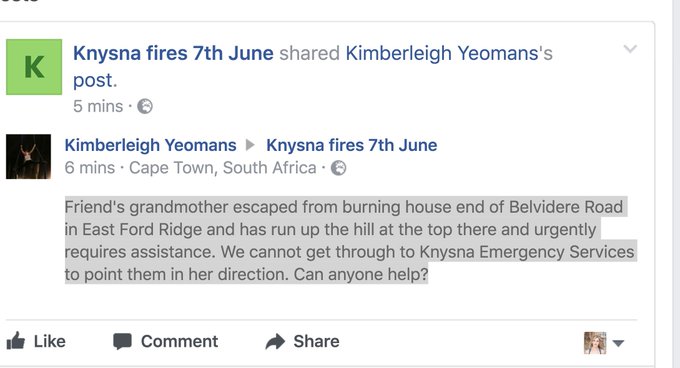 Panic was spreading‚ with some people having difficulty locating their relatives.

, everyone’s phone is on voicemail, even the neighbours, and my home is very close to the forest