A “conveyor belt failure” has thrust SA back into the load-shedding darkness.

At around 8.45pm on Saturday, power utility Eskom announced that stage 2 rotational power cuts would be implemented from 10pm that night until 8am on Sunday. It was the first time in more than three weeks that load-shedding would take place.

“Owing to an unanticipated conveyor belt at Medupi power station, the system is currently severely constrained and vulnerable. While a number of units are brought back on line following repairs and maintenance, it is essential to implement stage 2 load-shedding tonight [Saturday] from 10pm until 8am tomorrow [Sunday].

“This is in order to help us replenish both our water levels at pumped storage stations and diesel for or open cycle gas turbines in order to create adequate reserve capacity to place us in a better position to stabilise for the week ahead as South Africa returns to work,” the embattled power utility said. 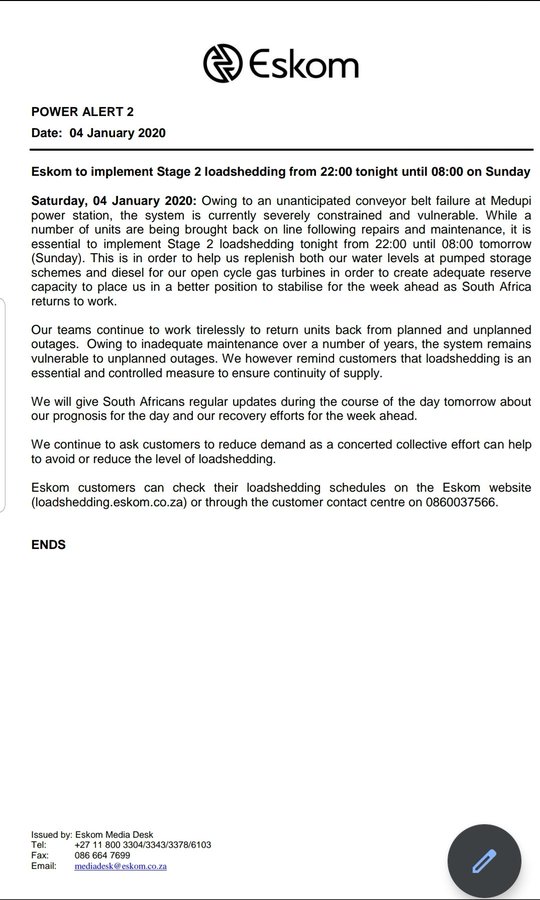 Eskom said that teams were working to return units back from “planned and unplanned” outages.

“Owing to inadequate maintenance over a number of years, the system remains vulnerable to unplanned outages,” Eskom said.

It added that updates on the situation would be provided on Sunday.

PE’s Day Zero: a result of poor planning and a failure to fix leaks

PE’s Day Zero: a result of poor planning and a failure...

PE’s Day Zero: a result of poor planning and a failure...