An immigration expert said on Monday the apparent early granting of citizenship was highly suspicious and the EFF said it would go to court to have the Guptas’ citizenship revoked.

Gigaba and the Guptas have yet to comment on the documents. The department said that it was trying to verify their authenticity. But Business Day has located correspondence in the thousands of leaked Gupta e-mails that supports their authenticity.

One of the letters released by the EFF, and which appears to bear Gigaba’s signature, is dated May 30 2015. It purports to show Gigaba writing to Ajay Gupta. “I have decided by the virtues of the powers vested in me under the South African Citizenship Amendments Act to waive the residential requirements in regards to your application for naturalisation and grant you early naturalisation.”

But‚ five months earlier‚ the then director-general for home affairs‚ GG Hlatshwayo‚ had written to the family, declining their application‚ saying they had not lived in SA for the required five years. This letter was also released by the EFF on Monday. 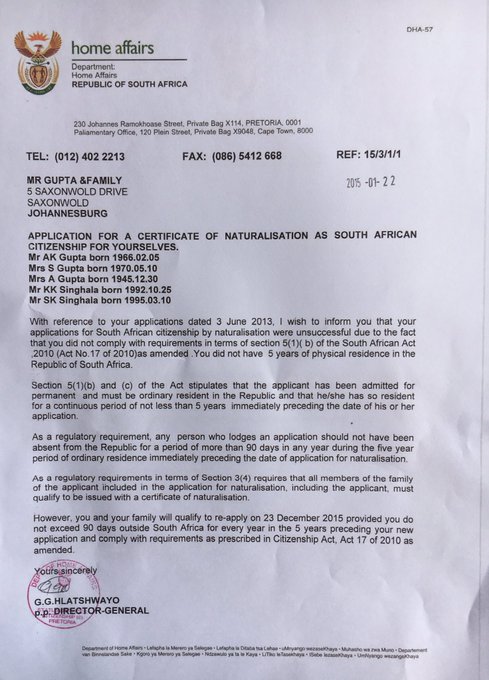 The correspondence had followed an application for citizenship in 2013 from Ajay Gupta, his wife, mother and their two sons.

“This is proof that the Guptas are not attempting to capture the state, but have already captured it and all its leaders. This shows that everyone is already dancing to their tune,” said EFF spokesman Mbuyiseni Ndlozi.

Home affairs spokesman David Hlabane said the department was searching for the necessary folders and documents to verify the information being reported. “We do not want to pre-empt or prejudge anything in terms of whether this is a serious matter or not. We first have to see what’s in the files.”

But immigration expert Leon Isaacson said the granting of early citizenship to the Guptas was highly suspicious. Since late 2013‚ people who wanted to apply for citizenship had to live in the country not for five years‚ but 10 years, he said.

When it rains at Port Alfred Hospital, it pours

When it rains at Port Alfred Hospital, it pours