Parliament has released a copy of the document that could seal the fate of President Jacob Zuma and the country.

A draft resolution of a motion brought by the Democratic Alliance lists the reasons why Zuma should be fired by the National Assembly.

Members of parliament will vote on the motion of no confidence on Tuesday.

The motion lists the axing of Pravin Gordhan as finance minister during a cabinet reshuffle in March as well the disastrous economic consequences that followed.

The paper urges the House to express its lack of confidence in Zuma on the basis of his “continued irrational‚ irresponsible and reckless leadership”.

Should the motion succeed‚ the president will have to step down‚ along with his cabinet.

National Assembly Speaker Baleka Mbete announced on Monday that she would permit a secret ballot‚ strengthening the chances that the motion would be passed.

However‚ the ANC enjoys a majority of 249 in the 400-member National Assembly‚ meaning that 50 ANC members would have to back the motion tabled by DA leader Mmusi Maimane.

Mbete’s decision came 46 days after the Constitutional Court ruled that she had the discretion to decide on the method of voting.

The court cautioned‚ however‚ that her decision must promote accountability.

The UDM had asked the Constitutional Court to force Baleka to allow a secret vote.

Chief Justice Mogoeng Mogoeng steered clear of dictating to parliament‚ but the unanimous judgment suggested that it would be hard to justify an open ballot in an atmosphere of intimidation.

The UDM application was based on threats received by MPs critical of Zuma‚ including Human Settlements Minister Lindiwe Sisulu and committee chair Makhosi Khoza.

Zuma has noted before that he is opposed to a secret ballot. 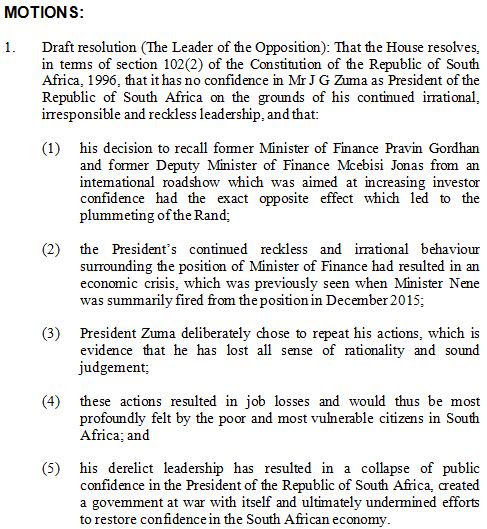 SIU to hand Covid-19 corruption report to Ramaphosa by Friday

What will Ramaphosa do? DA lashes out at government over record high unemployment

‘The new dawn is a fraud’: Maimane and EFF weigh in on increasing youth unemployment

SIU to hand Covid-19 corruption report to Ramaphosa by Friday