The CFO of the Gauteng health department has resigned.

Kabelo Lehloenya tendered her resignation at the end of May citing personal reasons,  the department said on Wednesday.

Of a total of 14,237 contacts traced, 10,665 people have completed the 14-day monitoring period with no symptoms reported and were de-isolated.

There are 228 people being treated in public and private hospitals.

Johannesburg had most of the cases in the province with 2,016 cases and 15 deaths, according to a breakdown of the districts.

Ekurhuleni had 887 cases and 10 deaths. Tshwane had 512 cases and four deaths.

Department spokesperson Kwara Kekana said the West Rand had 387 cases and four deaths. The Sedibeng district remained the only district with no deaths. 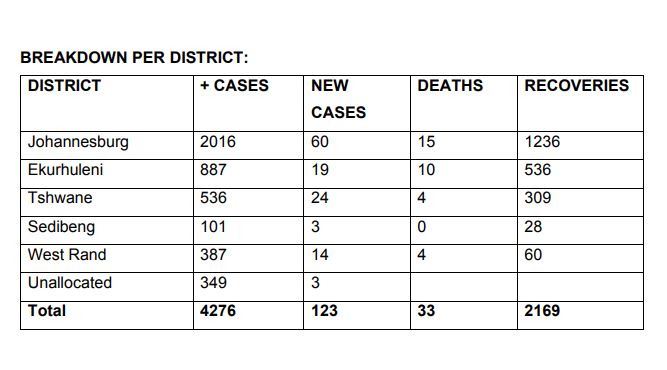 Breakdown of cases per district.
Image: Screenshot
BY KGAUGELO MASWENENG

‘We will not be able to feed ourselves’: Road Freight Association on SA’s decaying networks

The name ‘Smuts Hall’ is no more, decides UCT council

Living up to their high standard of #gracioushospi

Happy Father's day to all the dads on our Instagra

It's a beautiful day here in #portalfred Make the

Get ready for our Father's day feature!! A not-to-

Fancy spending #fathersday in the centre of the #u

If surprising dad for Father's day is on the cards

Are you ready for Father's day? This might help yo

If you missed this morning's Tittle Tattle live fr

A gin tasting at @tashscraftbar Together with @rou

Meals are for sharing.....or is it?! How delicious

Some more photos of a very successful potjiekos co

Potjiekos competition at the Port Alfred River and

Some of the businesses visited in Kenton today. Gr

Some more yummies from @fresh_food_health_wellness

Fresh on the scene! Newly opened, today in fact, i

‘All the objections are rejected’ — Nathi Mthethwa dismisses opposition to...

School pictures from around Ndlambe

5 things you need to know about SA’s plan for schools...

‘We will not be able to feed ourselves’: Road Freight Association...

The name ‘Smuts Hall’ is no more, decides UCT council