Another Covid-19 record was broken on Thursday, as 6,580 new cases of the respiratory illness were reported in the past 24 hours.

It is also the first time that more than 40,000 tests were done in a single 24-hour period.

The health ministry also announced 87 Covid-19 related deaths in the past 24 hours, taking the total to 2,292.

Of the deaths, 53 were in the Western Cape, 17 from the Eastern Cape, 15 from KwaZulu-Natal, and two from Gauteng.

There were also a record number of recoveries (59,974) which means that more than half of those who contracted the illness in SA had since recovered

The number of cases in the North West also continued its rapid climb, reaching 2,965 cases by Thursday. 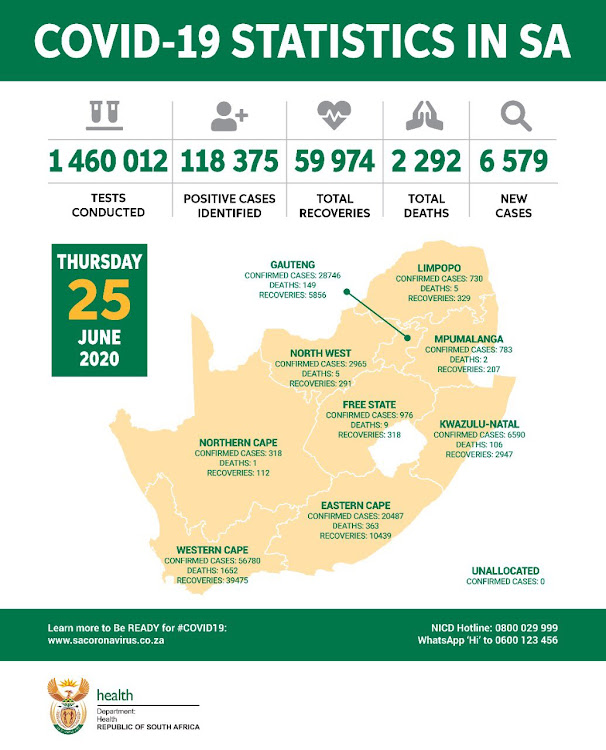 The team from @nicheportalfred, partnered with @au

Gifts and decor is what you can expect at Maison D

Be sure to get your copy of this week's edition of

A fine example of #teamworkmakesthedreamwork The t

Supporting local can't get easier! Check out this

Are you part of bring good news? Be part of the mi

Hungry? Order a meal or two from Penny Farthing. S

Save a life, donate some blood! Head down to Herit

On the go we go! Port Alfred restaurants do it in

If you missed this week's edition of Tittle Tattle

A magical night under the stars. Frankie and the M

Dancing and celebrating was the order of the day w

Living up to their high standard of #gracioushospi

Happy Father's day to all the dads on our Instagra

It's a beautiful day here in #portalfred Make the

Get ready for our Father's day feature!! A not-to-