AbaThembu acting King Azenathi Dalindyebo has been removed from the throne, effective immediately, just a week after the AmaDlomo royal family announced that he was to be crowned king after an imbizo when they voted him into power to replace his controversial father, King Buyelekhaya Dalindyebo.

Azenathi served as acting king after his father was sentenced to 12 years in prison for crimes including kidnapping, assault and arson. He began his sentence on New Year’s Eve of 2016.

Relations between the pair have been strained since Azenathi’s appointment against his father’s wishes and were further soured after the incarcerated king was released on parole. The king has in recent weeks publicly denounced Azenathi, claiming he is not his biological son and demanding he undergo a DNA test.

In March, the paroled king was arrested after allegedly “going on a rampage” and assaulting family members at Bumbane great place.

Azenathi was later charged with assaulting the king’s aide, Babalo Papu, in a separate incident.

Azenathi’s spokesperson, Thandisizwe Mtirara, on Monday night confirmed he had received a letter from Premier Oscar Mabuyane on Sunday removing Azenathi from his acting position.

“Yes, we received that letter from the premier on Sunday. But, for now, we have no comment,” said Mtirara.

Another Azenathi spokesperson, Dumisani Mgudlwa, said the letter was delivered to Azenathi and his council on Sunday by Cogta MEC Xolile Nqatha and officials.

“Azenathi has no problem returning the car and fuel card,” he said, adding that there was no problem with stepping down as an acting king. “We have already submitted his name as a permanent king.”

But, he added, they were unhappy about the instruction to vacate Bumbane.

“This is his home and the government cannot chase him away,” said Mgudlwa. “There is an issue between Azenathi and his father, and this matter is in court.”

The letter, which has already been leaked and shared on social media, was written on a co-operative governance and traditional affairs department (Cogta) letterhead and signed by Eastern Cape premier Oscar Mabuyane.

The use of the Cogta letterhead raised questions over the letter’s legitimacy, but Mtirara confirmed to DispatchLIVE that they had received it from Mabuyane, who wrote that Azanethi’s services had been terminated with immediate effect on the receipt of the letter.

The premier said Azenathi’s period as acting king had lapsed in February.

Azenathi was ordered to vacate the throne and Bumbane with immediate effect.

King Dalindyebo spokesperson Mthunzi Ngonyama confirmed that they too had seen the letter.

The premier’s office confirmed in a statement that Mabuyane had sent the letter and said “this communication means AbaThembu King, His Majesty, Ah! Zwelibanzi Buyel’Ekhaya Dalindyebo returns to his throne.” 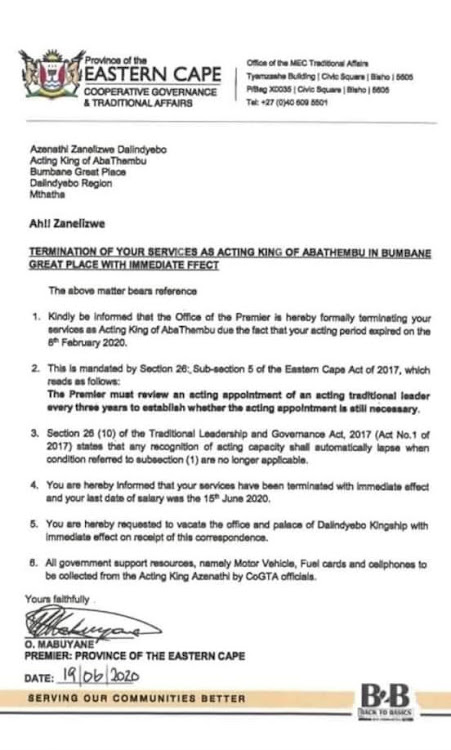 Today we did Tittle Tattle live from Lara's Eatery

How amazing does this look?! This can be enjoyed a

If you missed out on this on Mother's day, don't m

Mother's day was certainly celebrated in style in

It's a beautiful day after the electric storm last

In today's edition of Talk of the Town newspaper.

Welcome to the new spa receptionist at @cspawellne

Not registered to vote? You can get on the roll on...