Health minister Zweli Mkhize on Saurday announced that South Africa’s total number of confirmed Covid-19 cases had risen to 4,361 from 4,220 on Friday. An increase of 141 cases.

The country also had seven new fatalities; four people died from the Eastern Cape, two from the Western Cape, and 1 from Limpopo.

The Eastern Cape now has a total of 10  deaths in the province. Cases also increased from 480 to 488.

The provincial breakdown of cases is as follows: 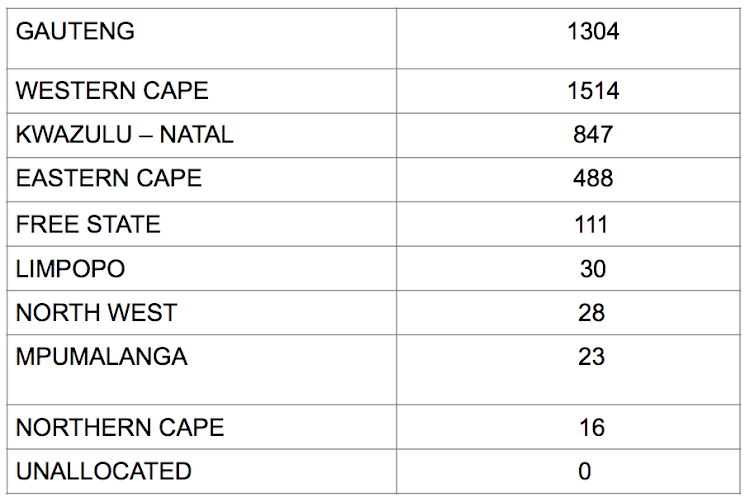 NSRI appeal: only swim at beaches watched by lifeguards

Happy birthday to the boss today! Thank you Anneli

Available at @tashscraftbar soon! Look out for it!

Appealing to residents and businesses in our distr

How does a Lowveld Fajita, either chicken or beef

Be sure to visit Barefoot Cafe on 31 October at th

A new addition on the menu at @tashscraftbar - wel

How much is your mouth watering?! Best you attend

Did someone say #flowers🌸 ?? Be sure to drop in

Get ready for the van der Riet street Festival! He

If you have never been to Thistle Thursday, you ar

One of the treasures in van der Riet street! #milk

The team from @royalstandrewshotelandspa are back!

Thursday!!! You know what that means!! #talk_of_th

Set in the beautiful surrounds of the Kinetic cent

Kick back and relax while enjoying the wide select

Free State farmers get help to rebuild after raging fires –...

Ramaphosa hopes a blueprint for a formalised taxi industry will emerge...

Free State farmers get help to rebuild after raging fires –...

NSRI appeal: only swim at beaches watched by lifeguards